A molecular specialist for arteries 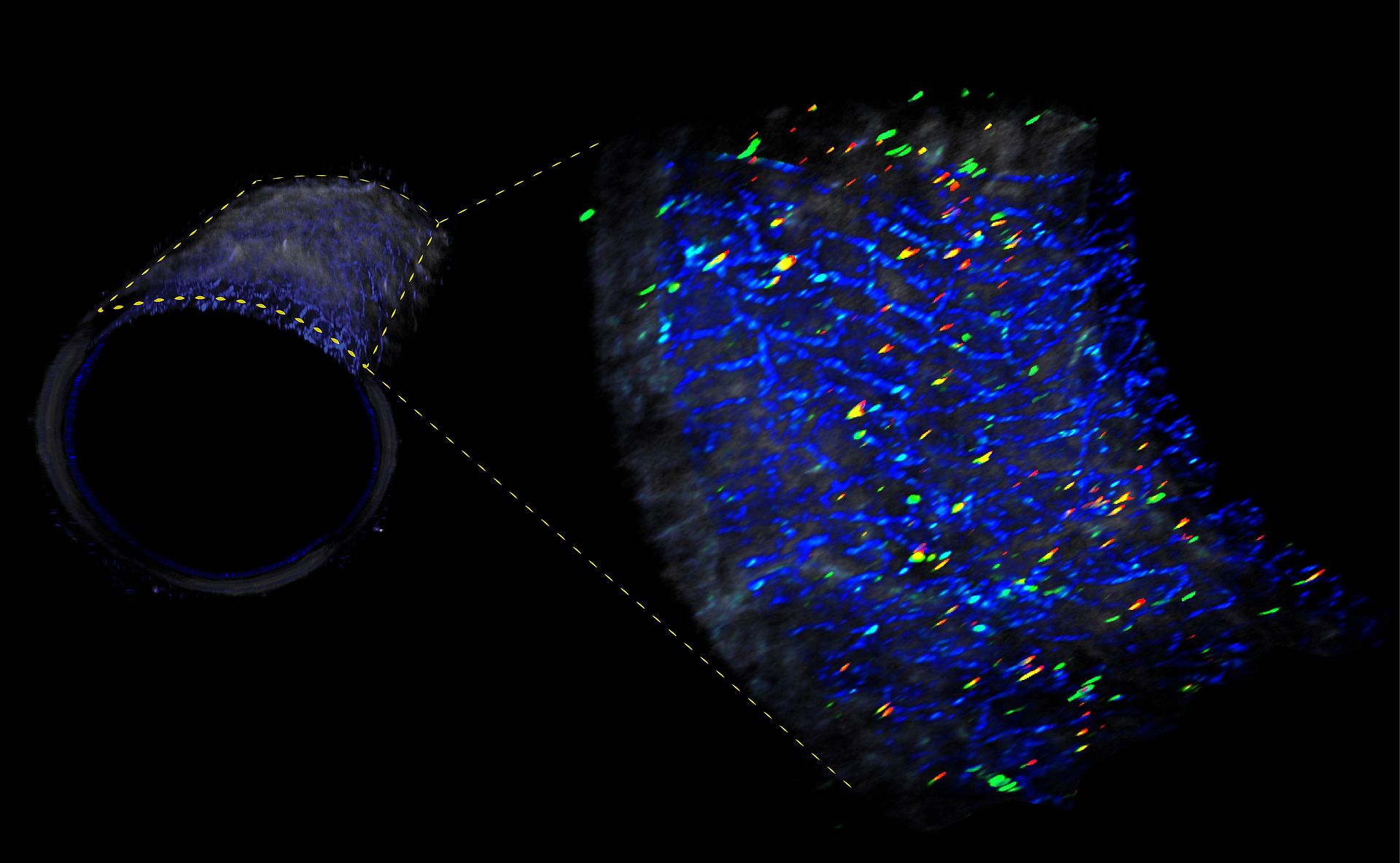 After a four-week high-cholesterol diet, cathepsin G (red) and CCL5 (green), a chemokine that stimulates the release of cathepsin G, have augmented on the inner wall of a carotid artery of a mouse. (Image: Söhnlein)

A molecule that only occurs on vessel walls of arteries causing inflammations there could be the foundation for a novel treatment of atherosclerosis. Researchers working with Oliver Söhnlein from the German Centre for Cardiovascular Research and from LMU Munich report about this in the current issue of Circulation.

Atherosclerosis is an inflammatory disease of the arteries. We have known for quite some time now that white blood cells, leukocytes, are also involved in this. During the course of atherosclerosis, they are attracted by messenger substances and cause an inflammation in the vessel wall. As a consequence, further restructuring processes in the vessel wall are initiated, which eventually lead to the harmful plaques. Leukocyte recruitment is an important process for all inflammations in the body. However, there is a substantial difference between acute inflammations that are possibly due to infections and atherosclerosis; in acute inflammations the influx of leukocytes is important for healing, whereas in atherosclerosis they exacerbate the course of the disease.

The researchers working with DZHK professor Oliver Söhnlein have thus asked themselves whether there are molecules that attract specific leukocytes in atherosclerosis, but not in other inflammations. In doing so, Söhnlein and his team came across the protein cathepsin G. It belongs to the protease family, which are enzymes that break down proteins.

In isolated human vessels and with the help of a fluorescent antibody, the researchers could prove that cathepsin G actually occurs on the surface of arteries, but not in veins (see image). Arteries are large vessels, which supply organs such as the heart and kidneys with oxygenated blood. The researchers could show that cathepsin G attracts leukocytes in knockout mice, which are animals that cannot create this protein. When these animals contracted atherosclerosis, significantly fewer leukocytes accumulated in their arteries than in normal mice with atherosclerosis. Also, considerably fewer plaques had formed in the vessel walls of the knockout mice.

Why cathepsin G only occurs in arteries has to do with the shear forces that exist there, which are higher than those in venous vessels, according to the findings of the researchers. For a start, the shear forces activate a specific type of white blood cell, which subsequently releases an increased amount of cathepsin G. Moreover, the protein is involved in the organisation of integrins, which enable leukocytes to resist the high shear forces in the artery.

The discovered mechanism presents the opportunity to selectively inhibit inflammatory processes in arterial vessels for the first time. Thus, other inflammations that elderly people suffer from in addition to atherosclerosis, remain unaffected – a deciding criterion for an atherosclerosis treatment with few side effects.