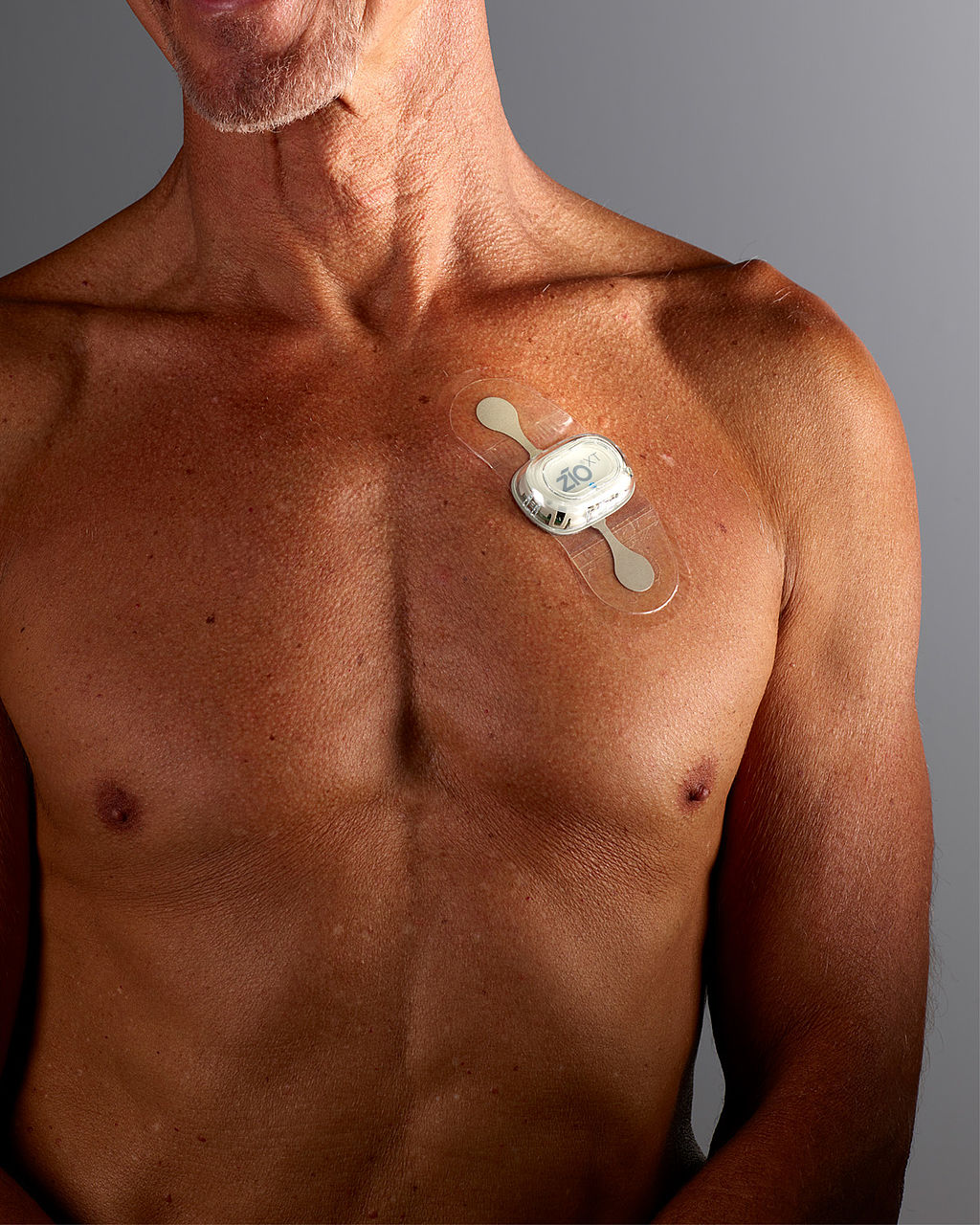 For the ECG recording a sticking patch with an integrated recording unit is applied to the patient's chest. Source: iRhythm Technologies

A new clinical study on the early detection of atrial fibrillation at home is starting at the German Centre for Cardiovascular Research (DZHK). This cardiac arrhythmia is responsible for a quarter of all strokes; and yet the risk of patients with atrial fibrillation having a stroke can be reduced by 70 percent if they take anticoagulants early enough. The problem is early diagnosis, because often the heart only beats irregularly in paroxysmal episodes, which does not cause any discomfort.

When the heart is in atrial fibrillation, the heart can only pump blood in a restricted manner and there is a risk of the formation of blood clots. If such a blood clot is swept away, it may block a blood vessel elsewhere. If this happens in the carotid artery or in vessels in the brain, it leads to a stroke. Taking anticoagulants early enough can reduce the danger of blood clots forming and thus also reduce the risk of a stroke.

The SCREEN-AF study’s aim is to improve the early detection of atrial fibrillation. It examines whether early atrial fibrillation can be detected with the help of two 2-week continuous ECG recordings. “We know from preliminary studies that paroxysmal atrial fibrillation is common in stroke patients. Now we want to investigate whether we find this cardiac arrhythmia just as frequently in elderly patients treated by their general practitioner for high blood pressure”, says Prof. Dr. Rolf Wachter, Leipzig University Hospital, who together with Prof. Dr. Eva Hummers-Pradier of the University Medical Center Göttingen is the principal study investigator for Germany. The study uses a new “rhythm patch”. This patch has a mini monitor as a recording unit which can record the heart rhythm for up to two weeks. In comparison to conventional Holter ECGs, this recording method is less cumbersome for the study participants and they can, for example, even shower without having to remove the patch. In addition, the study participants take their blood pressure twice a day with a blood pressure monitor suitable for home use.

“Besides investigating how often we find atrial fibrillation, we also want to ascertain how often and how long we need to measure in order to capture all cases”, Wachter explains the study procedure. For this reason, the 14-day ECG recordings and blood pressure measurements are repeated after three months, and after six months the general practitioner examines the heart of the patients.

The study is directed towards patients aged 75 or older who have high blood pressure, but so far have shown no indication of an arrhythmia. Co-principal investigator Prof. Hummers-Pradier of the Department of General Practice at the University Medical Center Göttingen has access to a network of general practice surgeries with whose help patients are recruited. The general practitioners are asked to search their databases for suitable patients once. A study team of the University Medical Center Göttingen then contacts the patients, has an informed consent discussion with them and attaches the monitor. A total of 405 patients shall participate in the study, which will also run in Hamburg and Frankfurt beside Göttingen.

The first step for a prevention programme

“Except for the management of risk factors such as obesity, high blood lipid levels or high blood pressure, there is currently no standard stroke prevention programme involving screening for atrial fibrillation”, Wachter describes the situation. The SCREEN-AF study is a first step in developing such a programme for the primary prevention of stroke. It is being conducted in cooperation with the Canadian Stroke Prevention Intervention Network’s (C-SPIN) SCREEN-AF trial (Principal Investigator David Gladstone, Sunnybrook Research Institute and University of Toronto, CA), who together with the DZHK is funding the study.

The German Centre for Cardiovascular Research (DZHK) is the largest centre for investigating cardiovascular diseases in Germany. Its goal is to translate new knowledge gained from basic research into clinical practice as rapidly as possible. In order to reach this goal, the DZHK unites basic researchers and clinical researchers from 30 institutions at 7 sites. The DZHK was founded in 2011 upon the initiative of the German Federal Ministry of Education and Research (BMBF) and is funded jointly by the Federal Government (90 percent) and the governments of those German states in which member institutions are headquartered (10 percent). It belongs to the six German Centres for Health Research (DZG) that are dedicated to researching major widespread diseases.