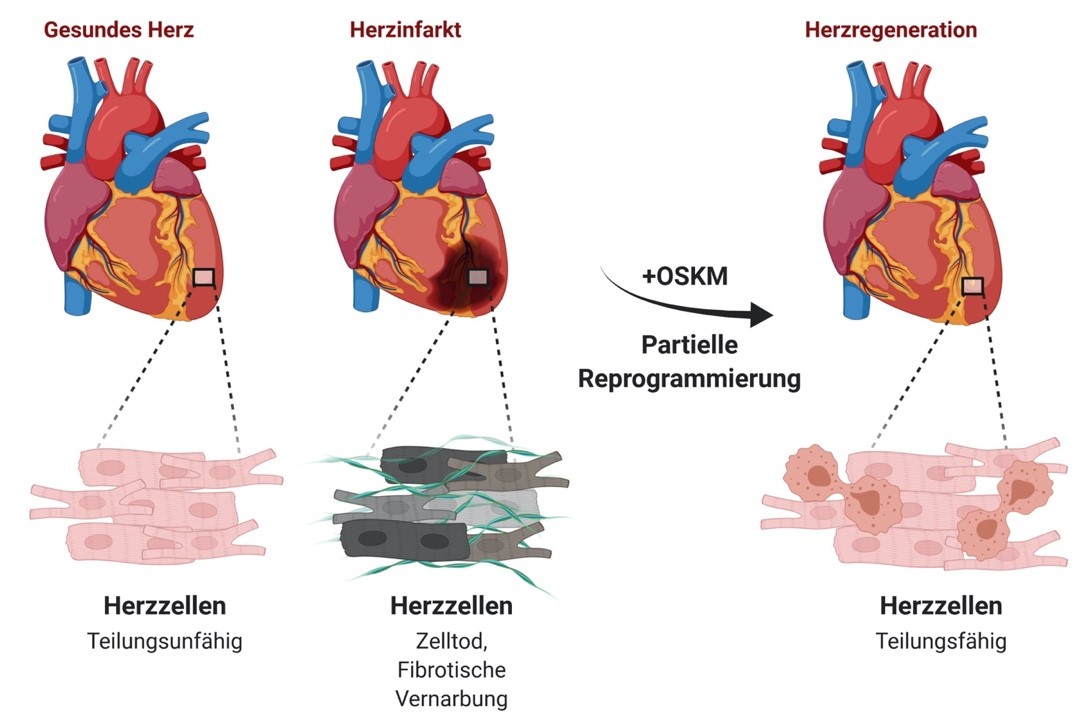 The human heart can only marginally heal itself when it is damaged. Because heart muscle cells hardly divide at all in a fully-grown organism. DZHK scientists from the Max Planck Institute for Heart and Lung Research in Bad Nauheim, together with an international team of researchers, have now reprogrammed heart muscle cells in mice so that the damaged organ can regenerate. The decisive factor, however, is how long and how strongly the cells are reprogrammed: if this is not optimal, the heart does not recover or tumors even form.

For their study, the team led by DZHK scientists Dr. Johnny Kim and Professor Thomas Braun introduced transgenic mice in which the expression of four stem cell factors in the heart can be switched on and off. The artificial expression of the factors reprogrammes the heart muscle cells so that they can re-develop and divide again.

Initially, the scientists succeeded in activating the factors in isolated heart muscle cells from the transgenic mice. As a result, the cells gradually divided again. When the factors were switched on, many genes involved in cell division and metabolic control were also active in the mice after six weeks. When factor expression was switched off again, the heart functioned unchanged. However, if the factors were active for a longer period of time, the heart changed significantly and irreversibly, leading to impaired function. With permanent activation, the heart muscle cells even lost their original identity and heart tumors formed.

The researchers then examined whether the four stem cell factors can also trigger repair processes in the damaged heart. “In an infarct model, regeneration processes set in with factor expression turned on in a controlled manner. Compared to control animals, the infarct scar was significantly smaller, ”said Kim. Cardiac output also improved if the expression of the factors was switched on briefly before or shortly after a heart attack.

According to Braun, Director at the Max Planck Institute, the study demonstrates that the therapeutic restoration of organ functions in tissues with poor regenerative capacity can be successful if cells incapable of dividing are restored to their ability to divide. “The fact that we have observed tumor growth in the heart under certain conditions also shows that there is still a long way to go before clinical application. Our findings indicate a natural contrast between regeneration and cancer development. Organs that regenerate well and have a high rate of cell division show a high risk of cancer, while those that regenerate poorly, like the heart, have a low risk of cancer. If the ability to regenerate is increased therapeutically, the risk of cancer also increases. Unfortunately, nothing in life is free ”.

This scientific publication was selected as Paper of the Month October 2021 by the DZHK Board of Directors.


Background information: Why does the heart heal so badly?

The mammalian heart is a high-performance organ. Reliable and adapted to the respective needs, it pumps blood through the body at a relatively high pressure. It is assumed that in the course of evolution this performance was bought at the expense of the organ's ability to regenerate as much as possible.

The reason for this could be that the individual heart muscle cells are permanently and very closely connected to form a so-called electrical syncytium. The individual cells are connected to one another via cell-cell contacts so that the electrical excitation line necessary for heart contraction can run in a controlled manner. New cardiac muscle cells produced by cell division could disrupt this physiological process and bring the heart out of rhythm..

Accordingly, unlike organs with a high regenerative capacity, there are no dividable, regenerative stem cells in the heart. The disadvantage: If parts of the heart muscle are damaged, as is the case with a heart attack, for example, the heart lacks the ability to heal itself. Functional regeneration of the damaged heart therefore usually does not take place.