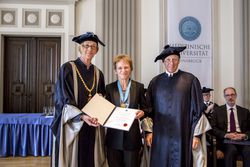 Prof. Dr. Vera Regitz-Zagrosek has been honored with an honorary doctorate from the Medical University of Innsbruck (Austria) on 25th October 2014 for her outstanding achievements in the field of gender medicine.

The internist and cardiologist is the Director of the Institute of Gender in Medicine (GiM) at Charité and speaker of the DZHK partner site Berlin. She has held the only professorship throughout Germany for female-specific health research with a focus on cardiovascular diseases. She explores differences and similarities between male and female hearts and the improvement of therapy for both. She is currently coordinating two EU-funded projects, including a roadmap for the implementation of gender in the European Health Research (EUGenMed) and a project of basic research (RADOX) and a DFG research group (gender differences in myocardial hypertrophy) and the Berlin office of the German Center for Cardiovascular Research. She published more than 200 articles in international refereed journals and over 30 book chapters. She is the editor of two European standard works on gender medicine and gender drug therapy. Since 2007 she has been the founding president of the German and International Society of Gender Medicine (DGesGM, IGM).