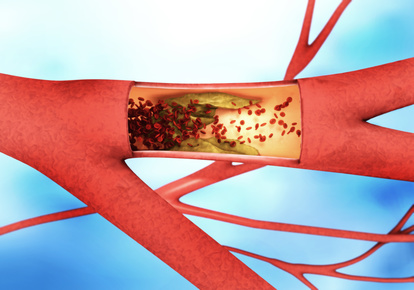 Deposition and narrowing of an atheria - atherosclerosis ©Christoph Burgstedt - stock.adobe.com

At LMU‘s Institute for Cardiovascular Prevention, DZHK Professor Oliver Söhnlein investigates the molecular mechanisms that underlie chronic inflammatory disorders, including atherosclerosis. These conditions are largely due to unresolved innate immune responses. In a collaborative study carried out by an international team of researchers, which appears in the journal Nature, he and his colleagues focus on the role of cells known as neutrophils, which form a large part of the innate immune system. “Every inflammatory reaction results in some collateral damage, because neutrophils also attack healthy cells,” he explains. The new report describes how neutrophils damage tissues by initiating a previously unrecognized type of induced cell death. Söhnlein’s group has also developed a synthetic peptide that inhibits this deleterious process.

Atherosclerosis is characterized by the build-up of fat-rich deposits known as plaques under the endothelial cell layer that forms the blood-vessel wall. Immune cells migrate to sites of plaque formation via the bloodstream in response to specific biochemical signals. They enter the underlying tissue by infiltrating between endothelial cells, while releasing compounds that attract still more immune cells, until at some point the inflammatory reaction becomes chronic. Chronic inflammation increases the probability that continuing plaque growth will lead to rupture of the lesion. Once this happens, the plaque can induce clotting and obstruct blood flow, and may precipitate a heart attack or a stroke. Neutrophils can play an especially pernicious role in the destabilization of plaques. “They bind to the smooth muscle cells that underlie the vessel wall, and are activated. Activation results in the release of chromosomal DNA and its associated histones, which are highly charged and cytotoxic. Free histones kill nearby cells – in the case of atherosclerosis, smooth muscle cells,” Söhnlein says. Histones cause the death of these cells by inducing the formation of pores in their membranes. This allows extracellular fluids to pour into the cells and causes them to burst. Loss of these cells in turn destabilizes plaques, as the latter are no longer supported by underlying smooth muscle cells.

Based on molecular modeling, Söhnlein and his group have designed and synthesized a peptide that binds to free histones and neutralizes their toxic effect. Thanks to its mode of action, the peptide should have the same effect on other disorders that are associated with chronic inflammation, such as arthritis and chronic bowel inflammation, says Söhnlein. A patent application has already been submitted. (Nature 2019)