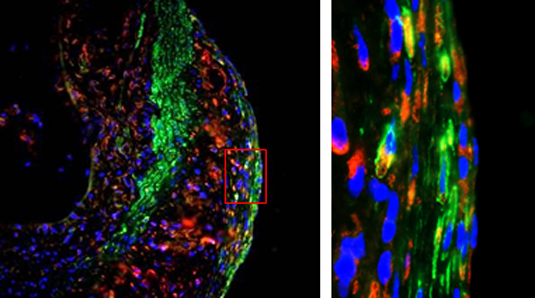 An atherosclerotic lesion in the mouse. Picture: Döring Research Group

LMU researchers led by Christian Weber (Principle Investigator at the DZHK) show that the chemokine receptor CXCR4 protects the integrity of arterial walls, and define a new mechanism that restricts the deleterious accumulation of cholesterol in atherosclerotic plaques.

Atherosclerosis is characterized by the build-up of fat-rich deposits on the inner surfaces of the endothelial cells that form the walls of the blood vessels. The presence of these atherosclerotic “plaques” leads to a chronic inflammation reaction, which can ultimately result in constriction of the vessel and the obstruction of blood flow in major arteries. Research teams led by Professor Christian Weber, Director of the Institute for Prophylaxis and Epidemiology of Cardiovascular Diseases (IPEK) at the LMU Medical Center, have long focused their efforts on understanding the molecular mechanisms that underlie the pathogenesis and progression of the disorder. In two new studies, which appear in the journal Circulation, he and his colleagues now describe two previously unknown mechanisms that help to retard the formation of atherosclerotic plaques.

In a project funded by the European Research Council, Weber is investigating the contribution of a class of signal proteins known as chemokines to the pathogenesis of atherosclerosis. Chemokines are small proteins released by various types of immune cells, which interact with specific receptors found on the surfaces of other cells and modulate their function. One of the new papers is devoted to the action of the chemokine CXCL12. Binding of CXCL12 by its receptor CXCR4 plays a significant role in controlling the recruitment of immune cells to sites of tissue inflammation. The results reported demonstrate that the interaction between CXCL12 and CXCR4 serves to inhibit the development of atherosclerotic plaques. “We have shown, for the first time, that activation of the chemokine receptor CXCR4 in endothelial cells limits the progression of atherosclerosis,” Weber says.

The researchers investigated the role of the signaling pathway by specifically inducing the deletion of the gene for the receptor in either the endothelial cells of the arteries or in the underlying smooth-muscle cells. In a mouse model, they found that the resulting depletion of the protein in either cell type stimulated the formation of atherosclerotic deposits. “As the amount of activated receptor falls, the more permeable the vessel wall becomes,” as Dr. Yvonne Döring, first author of the paper, explains. This in turn enables pro-inflammatory cells to migrate into the underlying tissues. Taken together, these observations imply that CXCR4 is essential for maintenance of the integrity of the endothelial cell layer. In addition, loss of the receptor in smooth-muscle cells altered their character and reduced their contractile responses. Subsequent analyses of variants of naturally occurring CXCR4 gene variants in humans confirmed that reduced expression of the receptor is indeed associated with increased risk for coronary heart disease. (Circulation 2017)

Cholesterol efflux and the MC1-R pathway

In a further study carried out at the IPEK, Professor Sabine Steffens and Dr. Petteri Rinne (who is now at Turku University in Finland) identified a novel function of the receptor MC1-R. MC1-R is best known for its role in activating synthesis of the pigment melanin in the skin, which acts as an endogenous sunscreen and protects against the mutagenic effects of UV radiation. However, the receptor has a variety of other functions. For example, it is thought to be involved in the regulation of inflammatory responses, which raises the question of whether it too might play a role in atherosclerosis. “MC1-R is expressed on the surface of macrophages,” says Steffens (macrophages are the immune system’s waste-disposal service; they ingest and dispose of dead and dying cells and other debris), “and we have now shown that it regulates so-called reverse cholesterol transport in these cells.” Specifically, the study demonstrates that activation of MC1-R promotes the extrusion of excess cholesterol from the macrophages found within atherosclerotic lesions, and actively prevents its re-uptake. Conversely, inhibition of the MC1-R signal pathway stimulates the transport of cholesterol into macrophages.

These findings imply that, like CXCR4, MC1-R also inhibits the development of atherosclerosis. Excessive uptake of cholesterol converts macrophages into so-called foam cells, which are known to contribute to the inflammation reactions within atherosclerotic lesions. This in turn increases the risk that plaques may rupture and obstruct blood-flow, which can lead to a heart attack or a stroke. (Circulation 2017)