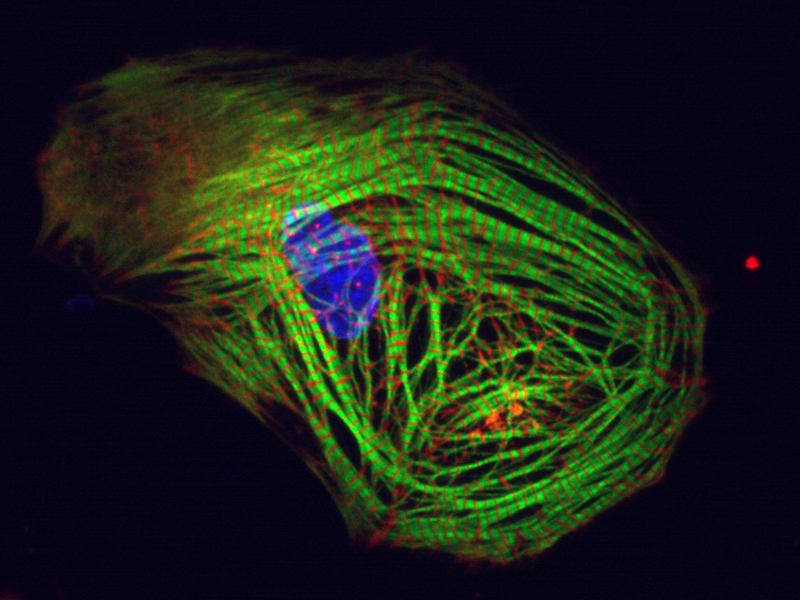 Cell models from stem cells serve an ever-increasing role in research of cardiac dysfunction. Researchers at the Technical University of Munich (TUM) and the DZHK have succeeded in producing cells which offer new insights into properties of the heart. They installed a molecular sensor into the cells which emits light, and not only makes the cells' electrical activity visible, but also makes it possible for the first time to quickly identify cell types.

It has been possible to produce so-called induced pluripotent stem cells in the laboratory for the past ten years. These stem cells are derived from white blood cells, for example, and can be infinitely reproduced in the laboratory, and be turned into all possible types of cells. This has enabled the use of heart cells produced in this way in order to investigate cardiac rhythm dysfunctions, for example. Animal experiments are only of limited use for this application, and tissue samples cannot be easily taken from patients' hearts. Cultivated heart cells, however, provide the opportunity to research such diseases in a 'miniature' format.

"Our development solves several problems which had made working with such cell models difficult," said t Dr. Daniel Sinnecker, Cardiologist at TUM's Klinikum rechts der Isar. Laboratory-produced heart cells still pose the problem of how one can best measure electrical activity. In the past, microelectrodes were most commonly used in order to directly determine the cells’ electrical signals. This procedure, however, is quite tedious, and can only be used on a small number of cells.

In addition, not all heart cells are alike. All heart cells are able to contract at their own cyclic rhythm, and to forward electrical signals to neighbouring cells. Yet, the cells which form the various structures of the heart, such as the atria, the chambers or the sinus node, i.e. the ‘pacemaker’ of the heart, differ significantly from each other, for example in their action potentials. These are variations in electrical voltage between the inside and outside of cells which form an electric signal that controls the excitation process in the heart and thus its contractions.

This difference becomes relevant when examining rhythm disorders which are caused by malfunctions in specific areas of the heart muscle. Producing heart cells from stem cells, scientists today have only insufficient ways of influencing whether those cells become heart chamber cells, atrial cells or nodal cells. In order to investigate a particular disorder, scientists must meticulously identify the type of each individual cell.

Biological sensors instead of microelectrodes

Daniel Sinnecker and his team described a possible solution for both of these problems in their article in the "European Heart Journal." Instead of relying on microelectrodes, the scientists used biological sensors. These are built from fluorescent, i.e.luminous, protein from deep sea jellyfish. The DNA which contains the "construction plans" for these sensor proteins is inserted into heart cells, which then produce the sensor proteins. When the altered heart cells are stimulated with light at a specific wavelength, they produce light at a different wavelength. The precise color of the returned light depends on the voltage difference between the cells' interiors and exteriors. One can therefore measure and record the action potential of individual cells using a special camera.

A special characteristic of this new method is that the inserted DNA can be coupled with specific recognition sequences, so-called promoters. These ensure that the sensor proteins are produced only in specific types of heart muscle cells. Thus, it becomes possible to capture only the electrical signals from atrial cells, heart chamber cells or sinus node cells, as needed.

In contrast to the prior cumbersome microelectrode technique, this method offers significantly improved performance. "We can already investigate hundreds of cells in one day instead of only a handful," says Zhfen Chen, first author of the study. "This process can basically be automated and scaled up, so that thousands of cells can be investigated at the same time."

"In the future, we can use our method not only in the laboratory in order to study disease," says Daniel Sinnecker. "The fact that we can investigate large numbers of cells means that we can also use this method for investigation of drugs, in which, for example, we can investigate whether a product has a negative effect on heart muscle." A challenge for such new types of procedures is that the cells must be produced in the needed quantities. Daniel Sinnecker and his team are working on increasing the sensitivity of their method.