Straight to the heart 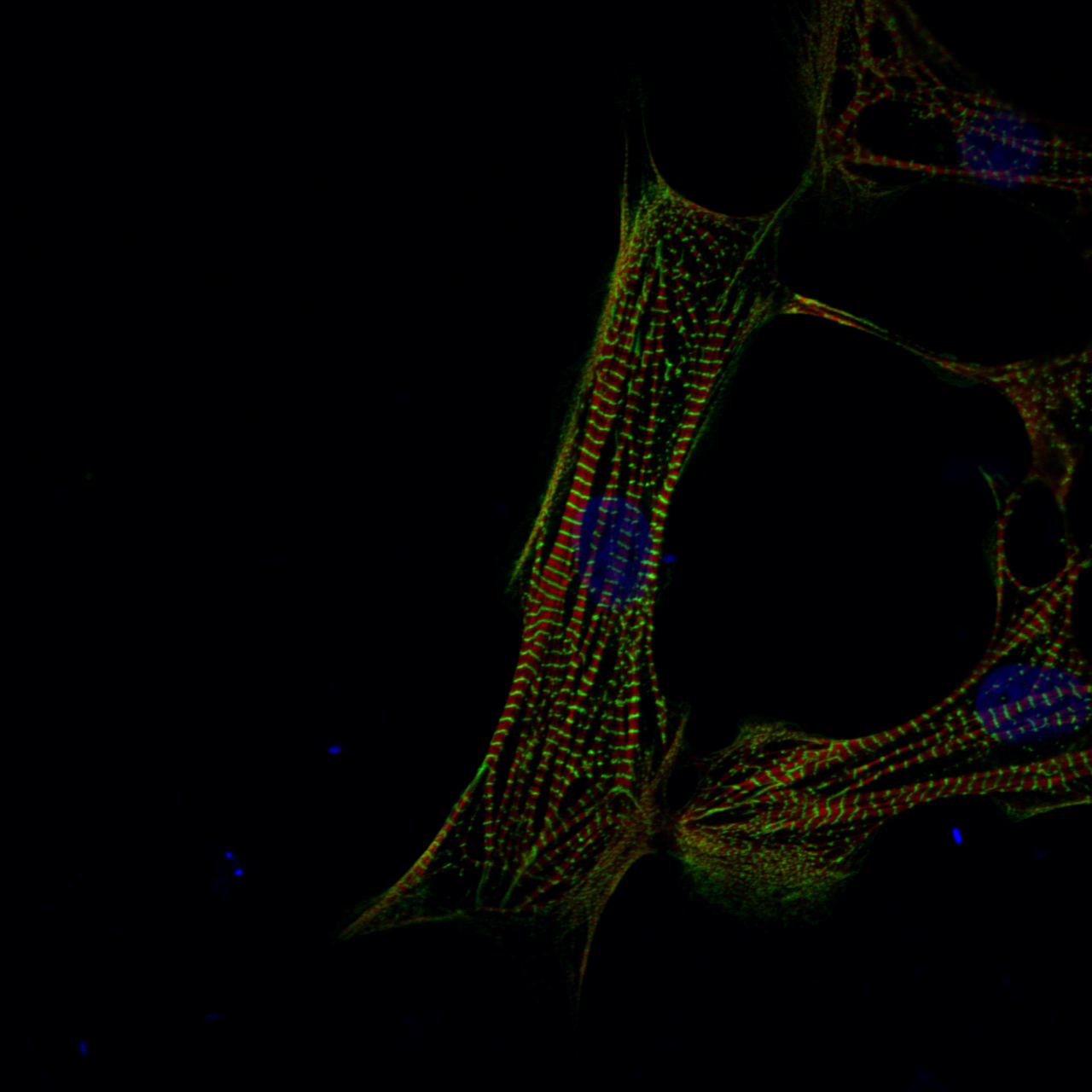 The dramatic differences in pressure that occur in the heart influence muscle development, causing cardiomyocytes to have to adapt to their environment. The picture shows human cardiomyocytes that were derived from induced pluripotent stem cells. © Sebastian Diecke, MDC

An international team of researchers are seeking to explore the heart at a depth that was previously impossible. They have now received a grant of nearly four million US dollars from the Chan Zuckerberg Initiative – as one of the 38 Seed Networks working on the Human Cell Atlas. MDC researcher Norbert Hübner is co-coordinator of the project.

At one time or another, everyone discovers that matters of the heart can be quite tricky. But on the other hand, most of us take our heartbeat for granted. “This, however, is where it gets really complicated,” says Professor Norbert Hübner, head of the Genetics and Genomics of Cardiovascular Diseases group at the Max Delbrück Center for Molecular Medicine (MDC)  – a DZHK partner institution.

Together with Jonathan Seidman, the Bugher Professor of Cardiovascular Genetics at Harvard Medical School, they have assembled a team of 13 of the world’s leading scientists – from Germany, the United Kingdom, and the United States – dedicated to probing and understanding the human heart, cell by cell. Their project is part of the international scientist-led Human Cell Atlas initiative, which the Chan Zuckerberg Initiative (CZI) is supporting under its CZI Seed Networks for the Human Cell Atlas program to the tune of nearly four million dollars. The US philanthropic organization announced on Friday that it will fund a total of 38 such networks, each focused on different tissues and organs.

“Working together towards a common goal”

“The global Human Cell Atlas effort is a beacon for what can be accomplished when experts across scientific fields and time zones work together towards a common goal,” says CZI Head of Science Cori Bargmann. “With CZI’s Seed Networks grants, we’re excited to further support and build interdisciplinary collaborations that will accelerate progress towards a first draft of the Human Cell Atlas.”

Many textbooks still teach that the human body is made of some 200 to 300 different types of cells. This number is actually much higher – and many of these have been barely or not researched at all. The scientists who, since late 2016, have been working on the Human Cell Atlas want to change that. They are using new technologies such as single-cell sequencing to map cellular diversity. This includes documenting which genes are currently turned on or turned off, which cell states exist and which cell type is responsible for what, how cells form tissue, and how cells change over their lifetime.

The heart shows just how important it is to simultaneously reconstruct the spatial organization. The ability of the blood to deliver oxygen to every corner of the body depends on the heart’s left ventricle forcefully pumping blood into the aorta – thus propelling it throughout the entire body’s circulatory networks. When, however, blood saturated with carbon dioxide returns to the heart, it must be pushed through the right ventricle – using 100 times less pressure – into the pulmonary arteries in the lungs. “Otherwise, the result is pulmonary hypertension and that – as with any malfunction of the heart – will become life-threatening sooner or later,” says Hübner. The dramatic differences in pressure that occur in the heart influence muscle development, causing cardiomyocytes to have to adapt to their environment: “We already know from individual genes that they can be turned on and off via biomechanical mechanisms. That is one of the things we now want to investigate in-depth.” The technologies required to do this are being developed by the research group led by Professor Nikolaus Rajewsky, who also heads the Berlin Institute for Medical Systems Biology at the MDC.

The Seed Network plans to collect samples from ten female and ten male donor hearts, each time from six precisely defined areas, in order to outline the variability of a healthy heart and its cell populations. What differences exist between men and women? Which variations simply show that every human is different, and which indicate that the cells are under stress? “Before we examine unhealthy hearts and can explain why certain heart diseases occur more often in women than in men and vice versa, we need a reference,” says Hübner. “This is similar to the Human Genome Project. Our network is, of course, only taking the first steps, but we can already discern a rough pattern.”

A pilot project lays the groundwork

However, single-cell analysis methods and protocols do not provide a single template that fits all tissues and organs. Each has its own consistency, a different extracellular matrix, or a different cell architecture. The cell populations in the heart are particularly diverse – ranging from the very large heart muscle cells, which make up about 40 percent of the tissue, to connective tissue cells, nerve cells, and immune cells. “The heart contains a great diversity of cells. Cardiomyocytes contribute to the pump function of the heart as well as to its intrinsic electrical system which activates rhythmic contraction and relaxation. Other cells constitute a series of valves that enable directional flow of blood, and there is a vast array of supporting cells,” says Seidman. “We know little about how the distinguishing molecular properties of each of these cells enable their highly specialized functions.”

In a one-year pilot phase, the scientists began by establishing a single-cell sequencing method for the heart, one that now produces reliable results. “We explored the topic in various ways – including with experiments on mouse hearts,” says Hübner.

The Seed Network is now working with valuable human tissue. One pillar of the project is therefore its cooperation with large clinical centers. “Obtaining a human heart for research is only possible in very rare cases – for example, if it could not be used to help other patients or if the deceased had only given permission for certain organs to be transplanted,” says Hübner.

Another pillar is data analysis. The results are to be integrated on different levels: cell states, cell types, the tissue, and the whole organ. Furthermore, the team is using both whole cells and isolated cell nuclei. “This can quickly lead to confusion in the algorithms, which is why we’re especially happy to be working with extremely competent bioinformaticians like those in the groups at Helmholtz Zentrum München,” says Hübner.

Much more than just a pump

Hübner is looking forward to the collaboration, explaining that the Chan Zuckerberg Initiative has succeeded in becoming a truly multinational funding instruments focused on scientific excellence and collaboration. “It enables people all over the world to find others that share common interests and are leaders in their respective fields,” he adds. The Seed Network not only builds on longstanding collaborations like those with the Imperial College London and Stanford University, but also brings in new partners. “We have had very good experiences with this,” says Hübner. “For example, this exchange led to a collaboration with the University of Chicago and with Sarah Teichmann’s laboratory.” She is the head of Cellular Genetics at the Wellcome Sanger Institute in Hinxton near Cambridge and co-chair of the Human Cell Atlas Organizing Committee.

“The Human Cell Atlas initiative is aiming to map every cell type in the human body, and we’re delighted that CZI are funding these new Seed Network projects.  In addition to supporting the heart project, enabling us to understand the cells that make up the human heart, the funding will support 37 other national and international collaborations to generate data on other individual tissues and organs,” says Dr Teichmann.

The heart Seed Network researchers now want to map the entire “heart system,” including the vessels. They are not only interested in the diversity of cell types, but also in which cells are neighbors and how they communicate with each other in networks using hormones, other signaling molecules, and electrochemical or biophysical signaling methods. “The heart is much more than just a pump,” says Hübner. “And it has to function perfectly for a lifetime.” This means 100,000 heartbeats every day.