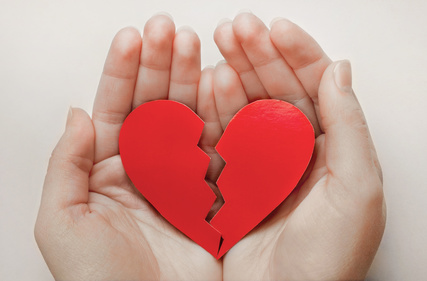 The loss of a loved one, a dispute with your neighbour, infections or a fall – mental and physical stress can be triggers of a broken heart (broken heart syndrome). What is more, physical stress seems to be more dangerous than emotional stress, a study of the German Centre for Cardiovascular Research (DZHK) shows.

A disease that causes similar conditions to, but is not, a heart attack lies behind a broken heart. Unlike in a heart attack, the coronary vessels are not occluded. Nevertheless, a part of the heart beats poorly, patients become breathless and experience chest pains. Why and exactly how this disease, also known as Takotsubo cardiomyopathy, occurs has not yet been explained. It is known, however, that it most commonly occurs in women in their post-menopause years and can be triggered by both emotionally demanding events and acute physical stress. Even good news and happy incidents cause heartbreak.

As a result of the DZHK study, the trigger “physical stress” is gaining focus. The study was able to confirm that infections, accidents or similar, i.e., everything that puts the body under stress, are often the triggers of a Takotsubo cardiomyopathy in men. By contrast, in women, it is emotional stress. Now, new findings show that physical stress as a trigger considerably worsens the prognosis in both women and men.

For this purpose, DZHK researchers analysed the data of 84 patients who were monitored for over four years and examined how the different triggers affected the long-term progress of the disease. “For a long time, it was thought that the disease was harmless, since the heart function usually recovered again after three months at the latest”, explains Dr. Ibrahim El-Battrawy, who works at the University Medical Centre Mannheim and is the principle investigator of the study and a DZHK young scientist at the Medical Faculty Mannheim of the University of Heidelberg. “Yet serious secondary diseases can indeed still occur months later and up to four percent of patients even die following a Takotsubo cardiomyopathy.”

During admission to hospital, all patients were asked whether they were suffering from high emotional or acute physical stress in the last one to two weeks. “We also determined that the group with emotional stress complained more about chest pains, whereas the group with acute diseases predominantly suffered from dyspnoea,” reports El-Battrawy. The crucial finding, however, was what was revealed over the long term: serious complications such as life-threatening cardiac arrhythmias, repeat heart failure, stroke, heart attack and recurrent Takotsubo cardiomyopathy occurred more frequently if physical stress was the trigger of the broken heart syndrome. Moreover, this patient group had a higher risk of death.

“Our study shows that physical stress is a risk factor for a poor disease progress and it contributes to further limiting the high-risk patient group”, concludes El-Battrawy. “The study also emphasizes how important it is to monitor patients over the short and long term. No matter what the trigger, patients should be monitored just as closely as heart attack patients and should have regular check-ups following discharge from the hospital.”

In other studies, the scientist already demonstrated that the cardiac disease progressed better in patients with diabetes than in patients who do not suffer from this metabolic disease; whereas cancer worsened the prognosis. According to El-Battrawy, a systematic review using a questionnaire on the triggers of a broken heart and existing primary diseases would thus be useful to better assess the progress of the disease and adjust the treatment to the patient.