Every heart is different – researchers clarify why 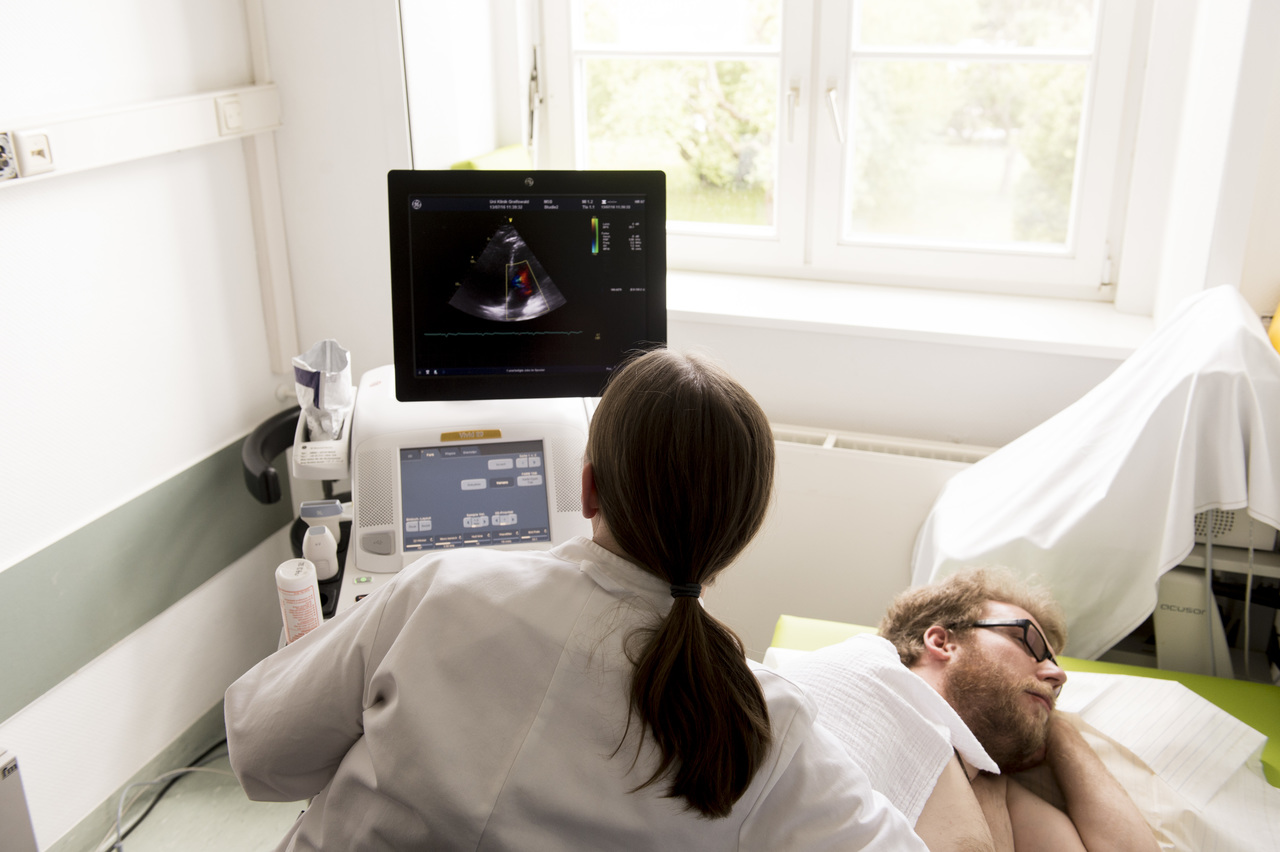 An ultrasound scan provides information about the hearts structure and function. (Picture: DZHK)

Strong or weak, big or small – variations in our genome play a decisive part in how our heart is shaped and works. Scientists of the German Centre for Cardiovascular Research (DZHK) together with an international consortium have identified ten new genetic variants associated with cardiac structure and function. The results contribute to the understanding of the complex pattern of genetic and environmental factors that underlies cardiovascular diseases and could thus form the basis for new therapies.

The paper published in The Journal of Clinical Investigation is a comprehensive meta-analysis of 30 population-based and hospital-based studies conducted by the international EchoGen Consortium. Headed by the DZHK sites Greifswald, Hamburg/Lübeck/Kiel and Rhine-Main, the scientists investigated whether certain features of the cardiac structure and function are associated with variations in the genome. Echocardiographic data of 46,533 participants predominantly of European ancestry were analysed for this purpose. The data contain information on the cardiac structure, e.g. left ventricular mass or aortic root diameter. Moreover, they comprise functional measurements of the systole, during which the heart pumps blood into the body, and the diastole, the phase when the heart fills with blood. A disturbance in both of these phases can cause cardiac insufficiency and thus, heart failure.

"For every single feature, we investigated whether there are genetic variants associated with this feature, and in a three-stage approach, we re-examined results from the first analysis in independent cohorts", Prof. Philipp Wild of the University Medical Center of the Johannes Gutenberg University Mainz illustrates the complex study design. In this process, researchers focused on typical variations in the genome, so-called SNPs (single nucleotide polymorphisms). These are loci in the DNA strand where only a single building block (nucleotide) is modified. SNPs are distributed randomly throughout the whole genome, but on average they appear every 300 nucleotides. They are most commonly located in genomic regions that do not contain any information on the blueprint of proteins. These regions, however, can have regulatory functions, e.g., controlling how often a blueprint is read and implemented.

Associations to cardiac structure and function

Seven of the identified genetic variations are associated with the size of the aortic root, i.e., the segment of the aorta closest to the left ventricle. Moreover, for four known genetic variants, the researchers could confirm that they are associated to this parameter. "The eleven genetic variants we have now identified account for only 1.7 percent of the differences in the size of the aortic root observed between individuals. That does not sound like a lot at first, but from another large genetic analysis we know that all SNPs known to date account for 30 percent of the inter-individual variance in the aortic root", Prof. Tanja Zeller, scientist of the University Medical Center Hamburg-Eppendorf, explains the influence of genetic variants on the cardiac structure. Moreover, the researchers discovered two new genetic variants associated with the diameter of the left ventricle. An additional genetic factor is associated with the filling dynamics of the left ventricle which, for example, can be dysfunctional in the case of heart failure.

For several of the investigated cardiac parameters, the scientists did not find any genetic variants. "There can be several reasons for this: either the genetic influence is too low that it was not discovered, or this is because we only focused on known SNPs and did not investigate the whole genome. So, having found nothing does not mean that there is no genetic influence", says Prof. Marcus Dörr, physician at University Medicine Greifswald.

Further functional studies have to clarify now how exactly the discovered genetic variants influence cardiac structure and function, since these could open up new possibilities for the prevention and treatment of cardiovascular diseases. Initial steps in this direction are currently being taken within the project group "Omics and Systems Medicine" established by the DZHK.