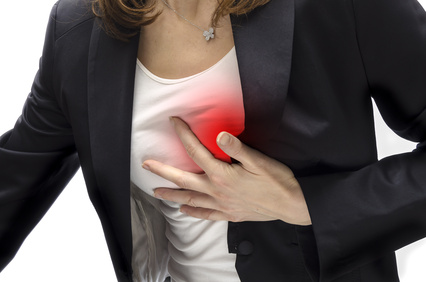 Fear protects people from danger. A team from Helmholtz Zentrum München and the Technical University of Munich (TUM) has discovered that this applies even to pathological anxiety disorders. Patients who generally suffer from severe anxiety are likely to heed the symptoms of a heart attack earlier and seek medical treatment sooner, thus improving their chance of survival. The study was published in ‘Clinical Research in Cardiology’.

People with anxiety disorder have irrational fears that are unrelated to any real danger. They are often apprehensive about everyday situations, which can put a heavy strain on their lives. The result can be an increased risk for cardiovascular diseases. However, since time immemorial fear has also served as an effective protective mechanism in acute emergencies. A team headed by Professor Karl-Heinz Ladwig of Helmholtz Zentrum München and the TUM has now discovered that even anxiety disorders can be advantageous when it comes to reacting to a heart attack.

For the study they made use of data from the MEDEA study (Munich Examination of Delay in Patients Experiencing Acute Myocardial Infarction), in which 619 heart-attack patients were interviewed in hospital within 24 hours of leaving the intensive care unit, as well as other data such as the time of arrival at the hospital and the course of the disease.

Prompt drug treatment after a heart attack reduces damage to the heart, subsequent health impairment and the likelihood of death.

About 12 percent of the patients in the study had anxiety disorder. It turned out that those patients reacted more quickly to an acute heart attack and arrived at the emergency room sooner. The time difference between female heart attack patients with and without anxiety disorder was particularly marked: on average, the former reached a hospital 112 minutes after the onset of a heart attack, while their counterparts without anxiety disorder took around two hours longer. Many scientific studies have shown that every half hour is crucial for survival following an acute myocardial infarction, Karl-Heinz Ladwig explains.

The team was, however, only able to statistically demonstrate the protective effect of anxiety in women, not in men. Nevertheless, a positive trend was also observed in men with anxiety disorder: they were able to be treated 48 minutes earlier on average.

More sensitive to their own health

“Individuals with anxiety disorder are at greater risk of having a heart attack but are more likely to survive it. Our data revealed an important factor,” explains Karl-Heinz Ladwig. “Individuals with anxiety disorder often react more sensitively to their health needs,” he adds. “Doctors should always take their concerns very seriously. Such patients are also more decisive when it comes to accepting help. In this way, one illness can help protect against another serious illness.”

Nevertheless, as the study also showed, the psychological costs of this survival advantage are high: patients with anxiety disorder suffer significantly more from stress, extreme fatigue and impaired general well-being than those without anxiety. In future studies, the researchers want to investigate the role of cultural differences and are planning a similar study in Shanghai.

Background: The MEDEA study is co-funded by the German Heart Foundation and is being realized as part of the Munich Heart Alliance.