Successes with heart tissue patches from the lab 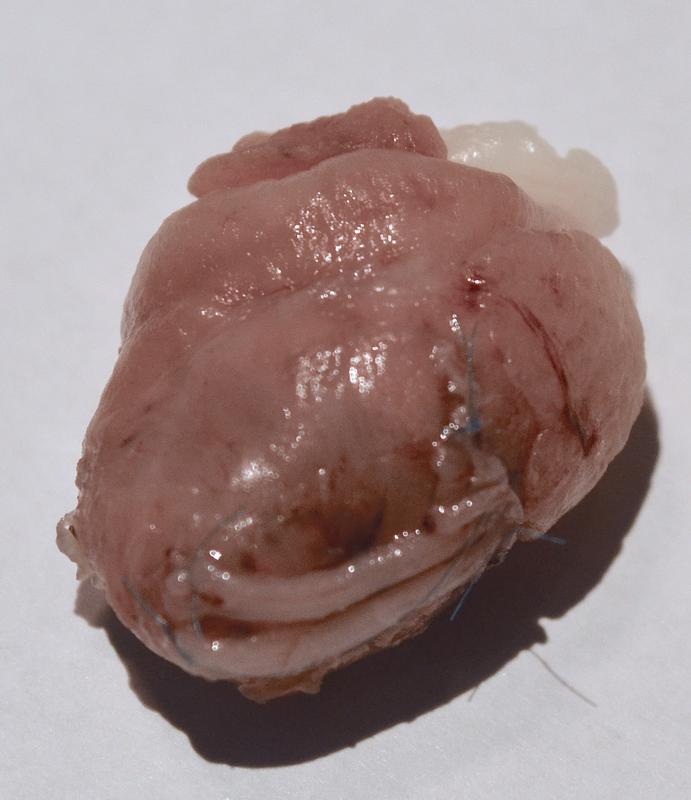 Engineered heart tissue grown in the lab is sewn on to the heart like a patch. (photo: DZHK/Weinberger)

Myocardial patches generated in the lab can be grafted on to damaged guinea pig hearts to improve heart function. That is what a team of researchers from Germany, Norway, Scotland and the USA found out and reported now in Science Translational Medicine.

Zebra fish and a few amphibian species can do it, mammals and humans cannot: that is replace dead myocardial cells with new ones. In humans a scar is left in the myocardium following an infarction and heart function usually permanently deteriorates.

That is why cardiologists dream of replacing scar tissue with artificial muscle. A team of researchers headed by Professor Thomas Eschenhagen from the German Centre for Cardiovascular Research (DZHK) and the University Medical Centre Hamburg-Eppendorf has been able to achieve considerable success in this highly competitive area of research. The researchers succeeded in transplanting engineered (´synthetic´) human heart tissue generated in the lab on to injured guinea pigs’ hearts. They used guinea pigs because of all small animals the electrical activity of their hearts has most similarities to human hearts. The new transplanted tissue was incorporated into the animals’ heart and the pump function improved by up to 30 percent.

One of the lead authors of the study, Dr Florian Weinberger (other lead authors: Dr Kaja Breckwoldt, Dr Simon Pecha), explains what distinguishes the group’s work from others: “We use induced pluripotent stem cells (iPS cells), these are reprogrammed human somatic cells from which all kinds of tissue can be grown. In contrast, groups outside Europe often work with tissue derived from embryonic stem cells. However, in Europe these are not allowed to be used for transplantation in humans”.

Another key difference is that the scientists used three-dimensional engineered heart tissue grown in the lab and subsequently sewn on to the heart like a patch, whereas other groups inject cell suspensions directly into the heart muscle. Describing the advantages and disadvantages of both approaches Weinberger says “The disadvantage of the injection technique is that most of the injected cells are washed out of the heart or do not survive the injection. This is inefficient and can also be dangerous if some cells have not yet fully developed into myocardial cells and are therefore still pluripotent. These cells could settle in other parts of the body and form tumours”. On the other hand, cell injection can be easily carried out via catheter. The tissue patches used in this study have the advantage that significantly fewer of the stem cell-derived heart cells are required and much fewer cells are washed away.

The scientists also performed control tests with other patches made from only matrix or cells other than heart cells, namely endothelial cells. They did this to exclude the possibility that stabilisation of the myocardium and improved cardiac function could be done with any type of tissue. However, heart function did not improve with non-cardiac patches. To rule out false positive results by subjective assessments, the researchers carried out all their tests in a blinded fashion, i.e. that they did not know themselves which animal had received the synthetic cardiac tissue and which had received other tissue.

The twitching cardiac patches made in the lab have their own rhythm and they only achieve their full capacity when they beat in synchrony with the recipient heart. This so-called ‘electric coupling’ is therefore important for the suitability of the replacement tissue. “To achieve this, we sewed the tissue into healthy tissue above and below the scar”. The researchers could observe this coupling of synthetic and native tissue in some of the animals. They do not yet know whether coupling failed or also happened in the other animals and was simply missed by their method of measurement.

The next steps for the use in human beings

There are still a few necessary steps to enable the use of this method for patients. For safety reasons, the researchers must closely examine whether and how many cells are washed out. Furthermore, they want to perform dosage studies to assess whether the number of cells can be reduced for the same effect. The timing of the therapy could also play a role. “We do not yet know whether there are differences in terms of when the synthetic cardiac tissue is added, should it be shortly after damage or when the damage to the heart is already chronic”, says Weinberger. And finally, the experiments must be repeated with larger animals, such as pigs, whose cardiovascular system is much more similar to humans. This work aims at translating the finding in animals to first-in-human therapy and will be supported by a research grant from the DZHK.